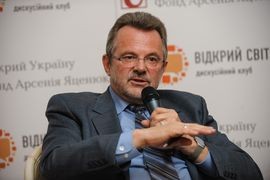 First of all ceasefire in the Eastern Ukraine should be reached. After that Ukrainian power together with civil society and EU countries should strengthen the economy and social stability in Ukraine

«Our main goal is to reach a peaceful solution of the conflict without using force. Minsk agreements implementation is our main task. There is nothing more important now» – said the Member of Parliament.

He also added that countries of the EU and Germany are exerting a lot of efforts to help Ukraine.

«Putin, Merkel and Holland signed a ceasefire agreement. Who else such influential could do that? Today ceasefire is very fragile but we are holding out hopes for it. If talking about what Germany and the EU can do to for Ukraine, we can support Ukraine financially, help with the Association agreement and with experts in order to strengthen the rule of law, support IDPs and organize a political dialogue. After achieving social stability and strengthening of economy – Ukraine will have all the chances to enter the EU» – mentioned Franz Thönnes.

Member of German Parliament is convinced that Russian intentions regarding the restoration of the Soviet Union will not have chances to succeed.

"You cannot restore the Soviet Union despite Russian strong intentions. Even Kazakhs and Belarusians will not agree to that. At the same time, the economy of Moldova, Ukraine and Russia are connected so much that Russia will always have an impact on the region. So we need to talk with Russia. Although, no doubt, there is no democracy in Russia, but we must return Russia on a right track. Russia depends on the West more than the West on Russia. 60% of the Russian budget depends on the sale of oil and gas. If the conflict continues, it will also hit the people of Russia ", - said Franz Thönnes.

He also urged the Ukrainian society to be active in the state building process and advised the youth to remember that it can change the future.

"You can be influential. All laws are written by people, and people can just change them. The only thing you need for changes – partners and like-minded persons. People need people to implement changes. You cannot achieve this by yourself"- summed up the Deputy Chairman of the Foreign Affairs Committee of the Bundestag.

Discussion Club “Open World” is an educational project for socially active young people. Its goal is to raise a new generation of responsible leaders.

Monthly the Foundation holds lectures with renowned experts, politicians and public figures, during which they discuss ways of effective solutions to social problems in Ukraine and the world.

The Friedrich Ebert Foundation is a German political foundation associated with the Social Democratic Party of Germany, yet independent of it. Fund is actively involved in the dissemination of policy freedom, solidarity and social justice around the world.

Franz Thönnes - Deputy Chairman of the Foreign Affairs Committee of the Bundestag.

Since 1978 Franz Thönnes is a member of the Social Democratic Party of Germany (SPD) and from 1986 to 1992 – Chairman of East regional party in Schtorman.

In November 2005 – November 2009, Mr. Thönnes worked as a Parliamentary State Secretary at the Federal Ministry of Labour and Social Affairs, and from March 2006 – Chairman of the German-Nordic Parliamentary German Bundestag Group for friendly relations development.