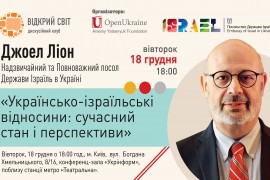 Arseniy Yatsenyuk Open Ukraine Foundation and the Embassy of Israel in Ukraine invite you to the Discussion Club "Open World" with Joël Lion, the Extraordinary and Plenipotentiary Ambassador of the State of Israel to Ukraine. The topic of the discussion: "Ukrainian-Israeli relations: current state and prospects".

The discussion will involve such issues as bilateral relations between Ukraine and the State of Israel. Prospects of cooperation at the interstate level will also be outlined.

Participation in the event is FREE. Registration for the event is OBLIGATORY. To register please follow the link – https://goo.gl/forms/1YSaQFBECtQN2rQx1 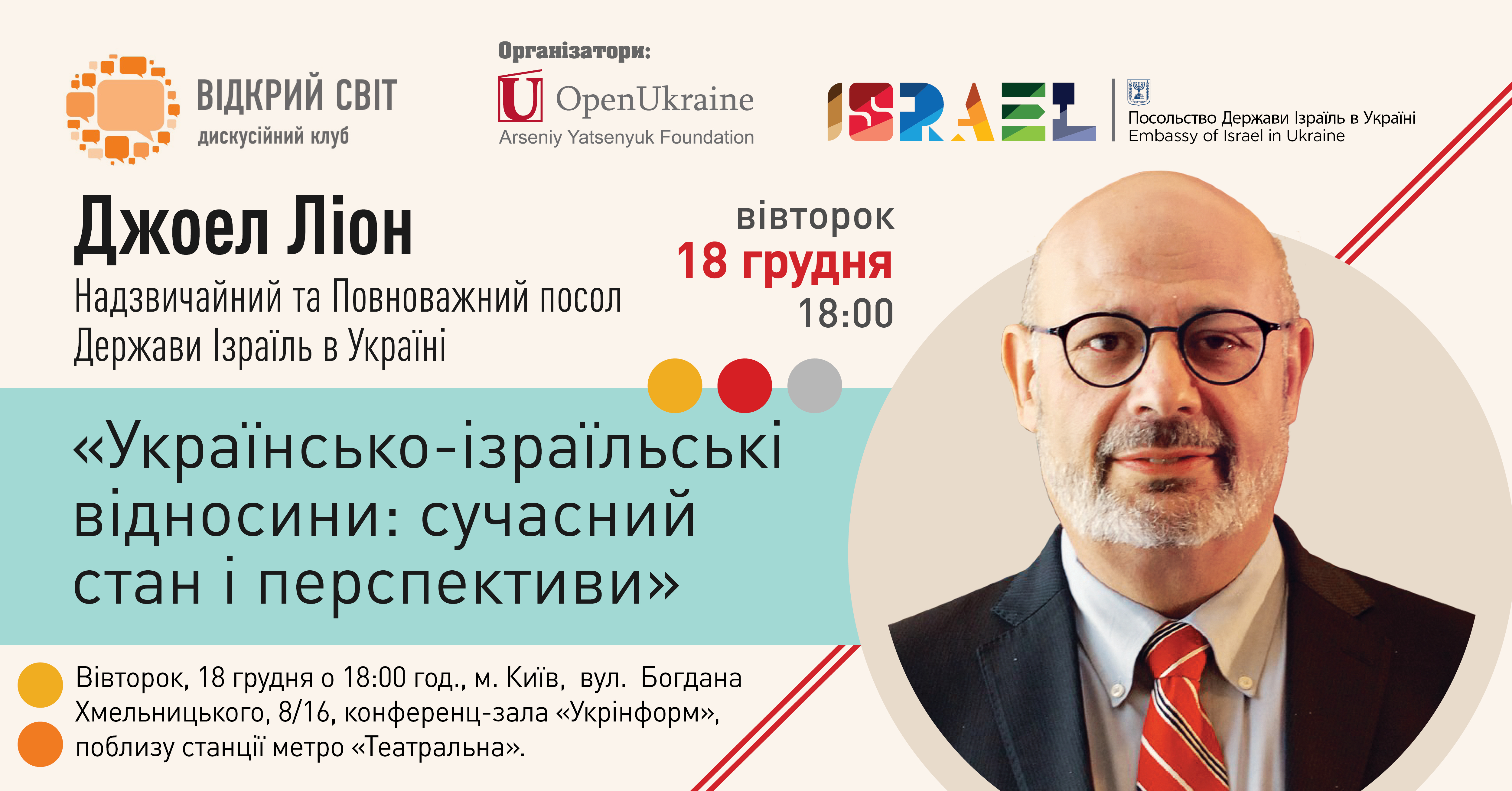 The working language of the event is English.

Since August 2018 Joël Lion is the Ambassador of the State of Israel in Ukraine. Ambassador Joel Lion was born in 1964 in France, raised in Luxembourg, he immigrated to Israel in 1982.

Joël Lion joined the Ministry of Foreign Affairs in 1993.

Between May 2017 and August 2018, Ambassador Lion was the Chief of Diplomatic Staff of the Deputy Minister of Foreign Affairs in Jerusalem.

From Aug. 2016 to Sept. 2017 Ambassador Lion held, the post of Special Envoy for the Return of Holocaust Era Assets at the Ministry of Foreign Affairs.

Before this, between 2014 and 2016, Lion was the Director of the Public Affairs and Branding Department of the Israeli Ministry of Foreign Affairs in Jerusalem.

From 2011 to 2014, Lion served as Consul-General of the State of Israel for Eastern Canada in Montreal and as Permanent Representative (Ambassador) to ICAO.

Prior to his position in Montreal he served as the Spokesperson and Consul for Media Affairs at the Consulate General of Israel in New York. He assumed this post in August 2009. Previously, he was Counselor, Head of the Public Affairs Department at Israel’s Embassy in Berlin. He also served as Deputy Chief of Mission to Latvia, Estonia and Lithuania at the Israeli Embassy in Riga and was Chargé D'Affaires for Slovakia at the Israeli Embassy in Vienna.

Among other appointments, he served at the MFA in Jerusalem as Deputy-Director of the Western European Department, in charge of political relations with Germany and as desk officer for Ukraine, Belarus, Moldova, Armenia and Georgia at the Euro-Asia Dept.

In 1999, Amb. Lion became the first Israeli official to partake in the mission of election monitoring with the Organization for Security and Cooperation in Europe.

At the start of the second Intifada in 2001 Lion operated as Spokesman with the MFA special team in Bethlehem. In 2009 he was in charge of the MFA Press Center in Sderot during operation "Cast Lead".

Before joining the Ministry, he held a number of positions at JNF-KKL in Jerusalem, as well as at the Ministry of Religious Affairs dealing with soviet Jewry.

Lion earned his B.A. in Political Sciences from the Hebrew University, Jerusalem in 1988, and received his M.A. in History from the University of Latvia in 1998 and is currently a PhD. Candidate at Bar Ilan University.

He is also an Orthodox Rabbi (Ordinated by Rabbi Dan Channen from Yeshivat Pirchei Shoshanim of Lakewood N.J. and by the Chief Rabbi of the city of Holon, Rabbi Eliyahu Yohanan Gur-Arieh.)

He is fluent in Hebrew, English, French, German, Luxemburgish and Yiddish as well as medium Russian.

He is married to Rivka, and is the father of eight children.