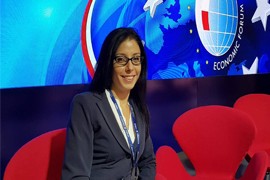 During the period from September 5 till September 8, 2017, the XXVII Economic Forum was held in the Polish scenic resort town Krynica Zdroj. It is the annual high-level international event within which heads of governments and parliaments, ministers and parliamentarians from Central and Eastern Europe, heads of major firms, experts of leading think tanks in the region and the world, representatives of cultural and scientific spheres and journalistic community exchange their views on current political, economic and social situation in the world.

«Taking into account my professional interests as a participant of the event I had an opportunity to participate in a number of panel discussions within the framework of the Energy Forum. To my opinion, an important part of the Forum was the strategic game «European-Norwegian cooperation in the field of energy security», which aimed to test the models of energy security in the countries of Central and Eastern Europe and Norway, as well as to identify qualitative changes that could lead to decision-making processes of the energy policy of the state and the enterprise, based on the domestic and international environment», - the representative of the Youth Council said.

According to Vira, participation in events of such a level allows promoting the expansion and strengthening of ties between the two countries, which creates the necessary foundation for the unity of positions in counteracting the threats of Russian neo-imperialism.

Vira KONSTANTYNOVA is a member of the Youth Council of the Open Ukraine Foundation YOUTHINK. She studied international relations at the Mariupol State University, Odessa І.І. Mechnikov National University. She has the qualification of an international policy expert with in-depth knowledge of Modern Greek and English. In 2015, she participated in a series of courses «How Europe works: an outward glance of the European institutions», organized jointly by the Robert Schumann Institute (Budapest, Hungary), Wilfred Martens European Center for European Studies (Brussels, the Kingdom of Belgium) and the Political Academy of the Austrian People's Party. Since 2015 she has worked in the structure of state authorities. She worked at the Ministry of Foreign Affairs of Ukraine, later as an assistant-consultant of the People's Deputy of Ukraine of VIII convocation, Committee of the Verkhovna Rada of Ukraine on Fuel and Energy Complex, Nuclear Policy and Nuclear Safety. Since 2017 she is a leading specialist of the Center for International Studies of the Gennadiy Udovenko Diplomatic Academy of Ukraine under the Ministry of Foreign Affairs of Ukraine.