«Armenia: choice between the Eurasian Union and the EU?» - meeting with Stepan Grigoryan 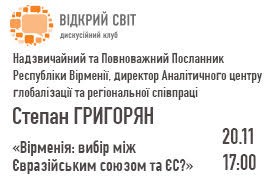 The Arseniy Yatsenyuk Open Ukraine Foundation within the Discussion Club «Open World» invites to the meeting with the Minister Extraordinary and Plenipotentiary, the Director of the Analytical Center of globalization and regional cooperation Stepan Grigoryan.

Theme of the meeting - «Armenia: choice between the Eurasian Union and the EU?»

Stepan Grigoryan will tell about the development of Armenia's foreign policy, share his experiences and ideas about the «energy maydan» in Armenia and tell why Armenians have doubts about the Eurasian future of their country and whether there is an opportunity to change the political course towards Europe.

Registration for the event is obligatory and available through the link  http://goo.gl/forms/tWcunHXaGn

Stepan Grigoryan is Minister Extraordinary and Plenipotentiary, Director of the Analytic Center of globalization and regional cooperation. He is the lecturer of diplomacy and foreign affairs in The Academy of Television and Radio in Yerevan, the Advisor of the Rector of Yerevan State Linguistic University on international cooperation and international programs. In 1998-2000 Grigoryan was the Advisor to the Minister of Foreign Affairs of the Republic of Armenia. In 1996-1999 he was the Permanent Representative of the Republic of Armenia in the matter of the Collective Security Treaty of the CIS. In 1995-1998 he was the Minister Extraordinary and Plenipotentiary of the Republic of Armenia in Russia. He also was the Member of the Armenian Parliament from 1990 to 1995.

Discussion Club «Open World» is an educational project of the Arseniy Yatseniuk «Open Ukraine» Foundation for socially active young people. Its goal is to raise a new generation of responsible leaders. Every month the Foundation holds lectures with renowned experts, politicians and public figures, during which they discuss ways of effective solutions to social problems in Ukraine and in the world.