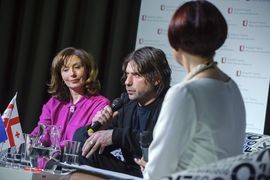 The leaders of the “Sukhishvili” ballet Nino and Iliko Sukhishvili told how they are going to surprise Ukrainian public during the concerts on March 6, 7th, 8th in Kyiv.

Their creative secrets they shared during the Art Club “Faces”, organized by Arseniy Yatsenyuk Open Ukraine Foundation, held on March 5 in Fedoriv Hub.

“We really like to come to your country. For ten years we come to Ukraine and give concerts. It is a great pleasure for us. As for our program, we always try to bring something new”, - said Nino Sukhishvili.

She said, that in last 2 years their program of performances in Ukraine undergone some changes.

“We are very nervous about the situation that is going on in your country. And to support Ukraine we are going to perform Ukrainian folk dance hopak, albeit with Georgian accent. This hopak we prepared in Georgia and brought here,” – said the head of the ballet.

As for the rest of the program, the “Sukhishvili” ballet will not betray its own traditions.

“There will be Georgian folk dances. Some of them – classical, some – prepared in recent years, modernized. But the entire program – is a two-hour concert. That is a kind of a trip to our small country Georgia, which is so similar to your country”, - added Nino Sukhishvili.

Iliko Sukhishvili – ballet choreographer, told how all new dances were created and how the motifs of folk dances are modernized.

During the opening of the event Tereziya Yatsenyuk, the Head of the Supervisory Council of Arseniy Yatsenyuk Open Ukraine Foundation, who were as the moderator of the meeting, thanked the guests for their support of Ukrainian people in this difficult time for the country and the active civil position.

“I would like to quote a passage from the Milan edition, which describes the activities of “Sukhishvili” ballet. “Georgian dancers are simply perfect. That is not a dance, that is a flight. Strom on the stage! Their dance defies the laws of gravity. Union male bravado and female grace. Fairy of dancers who fly into the air with kaleidoscopic geometry and military precision. “I am extremely pleased that today we all have the honor to speak with someone who creates this perfection” – said Tereziya Yatsenyuk.

By the way, the Sukhishvili dynasty manages the team over 3 generations already for more than 70 years.

Art Club Faces, launched by Arseniy Yatsenyuk Foundation Open Ukraine in partnership with creative space Chasopys is a platform for communication and exchange of experience of Ukrainian and foreign writers, musicians, artists, designers, filmmakers, photographers and other cultural representatives. The project aims at promoting contemporary art among young people, enabling communication with the already known and new faces in the cultural field.

The Georgian National Ballet was the first professional state dance company in Georgia . Founded by Iliko Sukhishvili and Nino Ramishvili in 1945, it was initially named as the Georgian State Dance Company. Thanks to this company the Georgian national dancing and music has become known in many parts of the world.