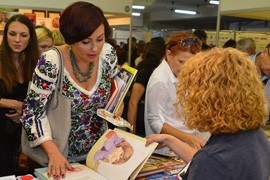 On Friday, September 12, Tereziia Yatseniuk, the Head of the Supervisory Board of Open Ukraine Foundation, visited the 21st Book Publishers Forum in Lviv.

She attended the Forum exhibition in the Palace of Arts, visiting the booths where Serhii Zhadan, Kapranov Brothers, Sashko Lirnyk, and Ivan Malkovych presented their books.

Tereziia Yatseniuk purchased books for children whose families had to leave the Donbas due to terrorist activities and are currently staying at one of the resorts in Kyiv Oblast. The children were taken in care by the Open Ukraine Foundation. Tereziia Yatseniuk plans to visit them after returning from the Forum.

The Head of the Open Ukraine Foundation took part in the “Give a Ukrainian Book to the Ukrainian Donbas” campaign, donating books to the central library of Artemivsk.

Tereziia Yatseniuk together with Yevhen Nyshchuk, the Minister of Culture, and Yurii Turianskyi, acting head of Lviv Oblast State Administration, visited Lviv Military Clinical Hospital, where the soldiers who took part in the anti-terrorist operation are undergoing treatment.

The Open Ukraine Foundation, chaired by Tereziia Yatseniuk, runs a special program for support of modern Ukrainian literature, which involves awarding grants for translation of the works of Ukrainian writers. Since the establishment of the program, over 20 translations of works by Ukrainian writers, in particular Yurii Andrukhovych, Oksana Zabuzhko, Mariia Matios, and Serhii Zhadan.

Open Ukraine Foundation also supports the International Book Publishers Forum in Lviv for the second year in a row, the Ukrainian booth at the Paris Book Fair, and other activities in the area of literature.