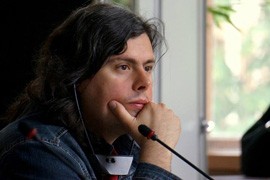 Supported by the Open Ukraine Foundation, Ukrainian poet, novelist and journalist Oleh Kotsarev participated in «Poetical Spring» Literature Festival that was held on 27 May - 3 June in Vilnius.

The Ukrainian poet took part in readings at the National Museum of Vilnius and in the Observatory in the suburbs of Vilnius. He participated in writers’ discussion during the conference “Poetry and Festival”. Also Oleh Kotsarev participated in performances outside Vilnius, and these performances consist of two parts. First – a trip with readers to small towns and villages of Samogitia (one of regions of Lithuania, which is characterized by particular local culture and specific dialect) – Lembo, Silale, Biyotu. Second – on the last day – performances in Klaipeda city on the shore of the Baltic Sea. The performance in one of the Klaipeda cafés was dedicated to the opening of the memorial plaque on it to the memory of local poet-futurist Salis Semeris.

Works by the Ukrainian poet sounded in original as well as in Lithuanian translation. Most works were translated by Vitas Deksnis from Vilnius, the rest of the texts – by Mindaugas Valyukas of Klaipeda. These translations as of today were published in festival almanac «Poezijos Pasavaris», in cultural weekly magazine «Šiaurės Atėnai» and in «Naujoji Romuva» magazine. Therefore, another series of Ukrainian poetic texts have found their international reader.

Oleh Kotsarev said that this trip was important for his personal and artistic development, and become one of the little, yet consistently targeted events in terms of promoting contemporary Ukrainian poetry in a global context. «Some new ideas for cooperation has already come up – for example, the idea of an essay about contemporary Ukrainian poetry for Finish magazine. Considering that now the world interest in our culture, naturally, increased – and, after Maidan and with a view to foreign terroristic aggression, these events draw a lot of attention to Ukraine, and even Scandinavian poets today are already familiar a little with Ukraine’s geography and its regions», highlighted the Ukrainian poet.

It should be noted that Arseniy Yatsenyuk ‘Open Ukraine’ Foundation has been already supporting ‘Cultural Horizons’ Program for the sixth year in a row. This program is dedicated to promote Ukrainian culture abroad and integration of Ukrainian art into the global context. Every year as part of the program the Foundation provides travel grants to Ukrainian artists for participation in foreign festivals, exhibitions, contests, and, respectively, representing cultural achievements of modern Ukraine.