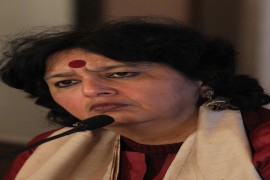 Being multicultural, multiethnic and multireligious India still manages to keep people in harmony. Such opinion was expressed by Indian professor Savita PANDE during the lecture for Ukrainian students – “Human security in international relations”, initiated by the Arseniy Yatsenyuk Open Ukraine Foundation.

During the meeting Savita PANDE focused on the importance of implementation in international lexicon the word - “securitization”. Explaining the term, the scientist said that the key issue of this idea is that individual becomes an integral part of the security. “Securitization means that people are included in security. It means when person feels freedom from mass problems”, - explained Savita PANDE. Besides, Indian professor mentioned that nowadays state security is often state – oriented and ignores that it is people who are forming the state and are its main value. “The state exists for taking care and protecting its people”, - professor stressed.

Also Savita PANDE underlined the importance of globalization in modern life. “You shouldn’t be afraid of globalization. Even modern Indian economic model is built on three main issues – liberalization, privatization, globalization”, - Mrs. PANDE noted. Besides she mentioned that in the process of globalization IT and Internet play integral role. They strengthen globalization and unite us. In this context we should remember about providing Internet and cyber security when people will feel safe, in this case democracy will become more democratic.

During the lecture the new world order was discussed. Savita PANDE commented her view on it: “India sees future world as unipolar with regional power centers. We think that USA is powerful actor of international relations and believe that the key centers of power in modern world order will be USA, China, Japan, Russia and India. We are sure, that India is moving in a right way and will become one of the most powerful international players in the modern world.”

Finally, savita PANDE encouraged Ukrainian youth to do everything to build their Ukraine – the country of today, tomorrow and day after tomorrow! “We, Indians, are proud of our identity and this is our success and power!” Mrs. Pande stressed. “During your studies don’t concentrate only on the problems of future jobs. Make yourself capable to reach something every day, build, support and save your identity daily, as in this – full power”, - Savita PANDE invoked.

For upbringing of new generation of Ukrainian experts Arseniy Yatsenyuk Open Ukraine Foundation will held lectures for students several times a year. During these meetings youth will have opportunity to exchange thoughts with leading experts on current issues of international relations. The project is initiated within the program of Foundation – “International dialogue”.