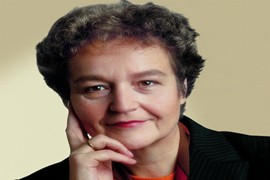 Herta Däubler-Gmelin is a former German Minister of Justice. She studied history, economy, law and political science in Tübingen and Berlin. Since 1974, she has been admitted as a lawyer, first in Stuttgart, then in Berlin.

Since 1992, she has lectured law at the Freie Universität Berlin, which made her an honorary professor in 1995. She joined the German Social Democratic Party (SPD) in 1965 and became a member of the Bundestag in 1972. She held several party offices in the 1980s and 1990s, serving as deputy party chairman from 1988-1997. From 1994–98, she was chairwoman of the "Rechtspolitik" working group and legal adviser to the SPD parliamentary group. In 1993, the SPD nominated her to fill the vacancy of vice-president of the Federal Constitutional Court, but after conservative parliamentary groups blocked the nomination for nine months as being "too political" she abandoned this career step in favor of Jutta Limbach. From 1998 to 2002, she served as Justice Minister in Gerhard Schröder's first cabinet, where she oversaw a number of controversial reform projects such as the reform of German citizenship legislation, the introduction of same-sex civil unions, and the overhaul of the German Civil Code, the most invasive since its inception in 1900. From 2002 to 2005 she was chairman of the Bundestag's Committee on Consumer Protection and Agriculture, and since 2005 she chairs the Committee for Human Rights and Humanitarian Aid. In October 2011, she was made a member of the European Commission High Level Expert Group on Media Freedom.

To participate in the meeting please fill in the registration form and send it by 10 a.m. of 10, October, 2013. Preliminary registration is required. The number of seats is limited.

Working language of the meeting is English.

‘Open World’ Discussion Club is a new educational project of the Arseniy Yatsenyuk Open Ukraine Foundation for socially active young people. The purpose of the project is to educate new generation of responsible leaders. Each month the Foundation initiates lectures with renowned experts, political and public figures for discussing efficient solutions to social problems in Ukraine and the world.