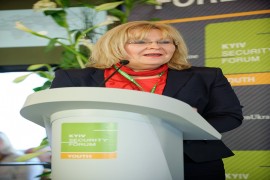 The nature of threats to global security has changed in recent times and they can no longer be viewed in the classical sense of interstate conflicts. Overcoming new challenges, above all, international terrorism, cybercrime, climate changes, government crises in some countries is possible only through joint efforts. Director of NATO Information and Documentation Center in Ukraine Natalia Nemylivska and Deputy Head of EU Delegation in Ukraine Maria Yurikova emphasized this, speaking at the opening of the 1st Youth Kyiv Security Forum on Friday in Kyiv.

Natalia Nemylivska expressed confidence that the forum will make a contribution to solving the problems of human security, which is becoming increasingly important in recent times. She stressed that NATO countries are changing approach to the concept of security. Now it is no longer seen as just defense of countries and their people, as it was immediately after the end of the “Cold War” because there have emerged new challenges – terrorism, cybercrime, climate changes and so on. And their solution is possible only through combined efforts.

Director of NATO Information and Documentation Center in Ukraine stressed that in the framework of joint overcoming of challenges, cooperation with Ukraine is very important, which has the status of the only partner country participating in all NATO operations. She believes that participation in these operations also makes a significant contribution to both own security of Ukraine, and also enables it to “develop a large number of partner programs”.

“After the end of “Cold War, we understand that such issues for the world, as, for example, famine, civil war and others – not less important than wars between states,” - also stressed in her speech Director of Regional Office of the Friedrich Ebert Foundation in Ukraine Ursula Koch-Laugwitz.

“The nature of threats has changed. They became not so obvious” - pointed on her part Deputy Head of EU Delegation in Ukraine Maria Yurikova. She singled out “failed states and their threat to global security” as one of these threats. She also named terrorism, cyber threats, climate changes as other important challenges. “No country can overcome these threats alone. Moreover, the problems and challenges are becoming increasingly relevant to the issue of crisis management in the European territory,” - she explained why the EU deals with the human dimension of security on the global scale. “Danger has no borders. It can threaten any country, and not only within the EU,” - she added.

Maria Yurikova stressed that Ukraine is a critically important partner of the European Union on the background of intentions of the organization to provide security in the global context. “The EU believes that independence of Ukraine is of great importance in terms of stability and prosperity throughout the world,” - she said. M. Yurikova pointed out that the EU and other partners of Ukraine support its European choice and help it to become one step closer to the European Union. According to her words, ambitions and plans of Ukraine and the EU to deepen their relationship and move together from the gradual economic integration to “deepening of the association” resulted in the completion of negotiations on the Association Agreement, which includes political association and economic integration of Ukraine and the EU.

At the same time M. Yurikova emphasized that the EU now faces important time in relations with Ukraine. “Foreign Ministers began discussions and negotiations on how to continue our relationship with Ukraine In my opinion, both sides, Ukraine and the EU should use this opportunity to the fullest,” - she stated, adding that at the base of European policies towards Ukraine has always been the issue of “spreading respect for human rights, democratization and the rule of law.” “The success of all reforms that will bring Ukraine closer to the EU ultimately depends on the political will of the Ukrainian politicians” - convinced the Deputy Head of EU Delegation in Ukraine.

The Youth Forum is made possible through a partnership with Victor Pinchuk Foundation, Regional Representation of Friedrich Ebert Foundation in Ukraine, and with the support of The Black Sea Trust for Regional Cooperation (a project of German Marshall Fund, USA), Center of NATO Information and Documentation in Ukraine, Democratic Control of Armed Forces (Switzerland) and the Center for International and European Studies at Kadir Has University (Turkey).