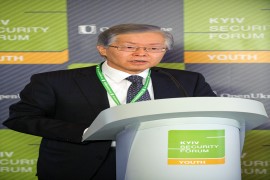 The human dimension of security has become one of the most fundamental principles of the foreign policy of Japan. This was announced on Friday November 23 by Ambassador Extraordinary and Plenipotentiary of Japan to Ukraine Toichi SAKATA, speaking during the 1st Youth Kyiv Security Forum “The human dimension of security in international relations: foreign policy for human”.

“Human security has become an important fundamental principle of the foreign policy of Japan and the Japanese government is actively involved in promoting the philosophy of the subject, in cooperation with relevant organizations and groups during bilateral and multilateral meetings and international symposia,” - declared ambassador.

Based on this principle, Japan is trying to turn the current century into the “century, centered around human.” Ambassador expressed his belief that to solve global issues now it is no longer enough to be guided by the concept of “national security”, which is capable by being improved by philosophy of “human security” – related to the resolution of problems associated directly with individual. Toichi Sakata singled out four main priorities of this philosophy: poverty reduction, sustainable growth, solving global problems, creating peace.

The diplomat pointed out that it was through Japan’s initiative in 1998 the Trust Fund for Human Security was established in the United Nations. Later, at the Millennium Summit in 2000, Japanese side has also suggested creation of the Commission on Human Security, later announced by UN Secretary-General Kofi Annan. In the period from 1999 to 2011 through this fund Japanese government has allocated about 370 million USD to support 210 projects in 123 countries. In particular, reminded the Japanese ambassador, about four million USD to support the population affected by the results of the Chernobyl accident in April 1986, which was allocated by the Trust Fund for Human Security.

Regarding Ukraine, as noted Toichi SAKATA, Japanese embassy is implementing so-called project KUSANONE, which is one of the most important international cooperation projects of the Government of Japan. “This program is aimed at protecting lives and health of people, as well as assistance to individuals. Given this, we help schools, hospitals, local governments directly, not through the central government,” – announced diplomat. In particular, under KUSANONE 67 projects for a total sum of 4.2 million USD are already implemented in Ukraine since 2001.

Toichi SAKATA also pointed out that during the visit of the President of Ukraine to Japan in January last year, in a joint statement on the Japanese-Ukrainian global partnership, in particular, it was emphasized that human security is “important and effective” in the context of cooperation between the two countries in various fields of common interest: climate change, terrorism, drug trafficking, poverty, health care. “We are pleased to combine efforts with Ukraine as well as other countries, in order to make the 21st century “the century of human security,”- emphasized ambassador.

The Youth Forum is made possible through a partnership with Victor Pinchuk Foundation, Regional Representation of Friedrich Ebert Foundation in Ukraine, and with the support of The Black Sea Trust for Regional Cooperation (a project of German Marshall Fund, USA), Center of NATO Information and Documentation in Ukraine, Democratic Control of Armed Forces (Switzerland) and the Center for International and European Studies at Kadir Has University (Turkey).