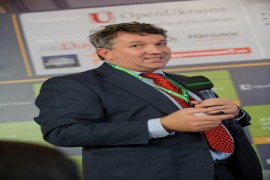 Internal security associated with human, society is becoming more important than external one associated with the territory. Thus, each person has to contribute to our own security. This was announced on Friday by senior scientist at the Hague Centre for Strategic Studies Stephan de Spiegeleire, speaking during the session “Human Security in the European Union” at the 1st Youth Kyiv Security Forum “Human security in international relations: foreign policy for human”.

The expert is convinced that in recent time the concept of security has changed. Citing the evolution of this concept, he pointed out that from the very beginning, people led nomadic way of life and safety in their understanding was reduced to protection of their own clan. Then emerged the need to protect the place of residence that has assumed greater importance in the “industrial age”: “borders, lines were erected between people.” At present “post-industrial,” according to his classification, era object of security “is not so easy to figure out,” the world is not so clearly demarcated as the result of globalization. “And we understand that the idea of the nation state today does not work out,” - believes Stephan de Spiegeleire.

He said that precisely in the creation of the European Union embodied the idea of avoiding “bloody wars” between different European countries on a national basis, which occurred in the past. “Now this principle, the principle of territorial security no longer works, it is not about territory but about people – that they should be protected,” - he said. “That is why the European Union tends to transcend national boundaries, become more centralized,” - added expert. At the same time he stressed that the EU correctly should be seen as human union, “and not as some institutional shell.”

Commenting on the EU Security Policy, expert pointed out the need to find balance in spending on areas of security and defense. “If you look at security doctrine, it is very complicated. 90% of resources that are allocated for security are spent on defense issues,” - he said. “The main issue is that how we should use our funds, what are our priorities, what will help us to strengthen our security,” stated expert.

Fellow of Hague Centre for Strategic Studies expressed the view that security is now no longer associated with traditional military defense. “Foreign security has become less important than internal security – the security associated with people,” - he said. “In the post-industrial period, the period of globalization and the Internet we should care for people. Old Europe and New Europe, and Ukraine is definitely part of the New Europe – we all need to remember that human security is not who will protect us, but how we can become smarter, protecting ourselves,” - emphasized expert.

The Youth Forum is made possible through a partnership with Victor Pinchuk Foundation, Regional Office of Friedrich Ebert Foundation in Ukraine, and with the support of The Black Sea Trust for Regional Cooperation (a project of German Marshall Fund, USA), Center of NATO Information and Documentation in Ukraine, Democratic Control of Armed Forces (Switzerland) and the Center for International and European Studies at Kadir Has University (Turkey).