Forum was organized by Arseniy Yatsenyuk Open Ukraine Foundation uniting the high-ranking Ukrainian and foreign politicians and opinion leaders from Ukraine, Europe and USA to exchange their views about the Immunity of Eastern Europe: Vaccine of Freedom Against Virus of Oppression.

The KSF 2020 was opened by Mr. Arseniy Yatsenyuk, Chairman of the Kyiv Security Forum and Prime Minister of Ukraine (2014-2016), who emphasized that long-lasting peace in Europe could be achieved only through further EU and NATO enlargement. He emphasized that Ukraine needs a long-lasting peace. "Peace on Ukrainian terms. Peace is not through surrender and enslavement. Not because of reconciliation on Russian terms. Peace is solely for Ukraine to regain its historical, legal and legitimate territories: Donetsk, Luhansk and Crimea. In order for Ukraine to receive real, not imaginary security guarantees, as was the case under the Budapest Memorandum."

Arseniy Yatsenyuk called on the U.S. and EU partners to establish a senior level mission aimed – "to provide sustainable peace and stability in Europe as well as to finish the historical unification of Europe. That is not similar to the United Nations. That is a united mission of the U.S. and Europe aimed to reach and to ensure unity of Europe."

In his video address to the Forum participants, the President of the European People's Party and the President of the European Council in 2014-2019 Donald Tusk stressed that the EU should reconsider its attitude to Eastern Europe, "all interested countries should send a political signal with clear action plans." Mr. Donald Tusk underlined the need to restore strong democratic leadership of the West – "Either the United States, the European Union and the region’s democracies (including Ukraine) offer thoughtful approaches how to support Europe’s East on a difficult road to democracy, real independence, and membership in the European project, or the vacuum of leadership will be used by Russia."

The world-known philosopher and the Senior Fellow at Stanford University’s Freeman Spogli Institute for International Studies Prof. Francis Fukuyama has reflected on further success of Ukraine that has to develop its democratic institutions and fight against corruption. That will become a precondition for other countries in the region to move forward in a democratic way – "Ukraine could become an inspiration and a beacon for other people who want to live in free and democratic societies."

The Belorussian human rights defender and political activist Mrs. Sviatlana Tsikhanovska has sent the words of deep gratitude to the people of Ukraine for their support of the peaceful protests in her country and emphasized the inspirational example of Ukraine. The Secretary of the Council of the National Security and Defence of Ukraine Mr. Oleksiy Danilov has also reflected on the situation in Belarus and has identified it as very complicated. He considered that in case this situation will be out of Lukashenko’s and Putin’s control, the Russian Federation may also use its Armed Forces. The Minister of Foreign Affairs of Lithuania Mr. Linas Linkevičius and Lt. Gen. Ben Hodges, Commanding General at the U.S. Army Europe (2014-2017)  and Ivanna Klympush-Tsintsadze, Chairwoman of the Parliamentary Committee on Ukraine’s Integration with the European Union also joined the regional discussion. 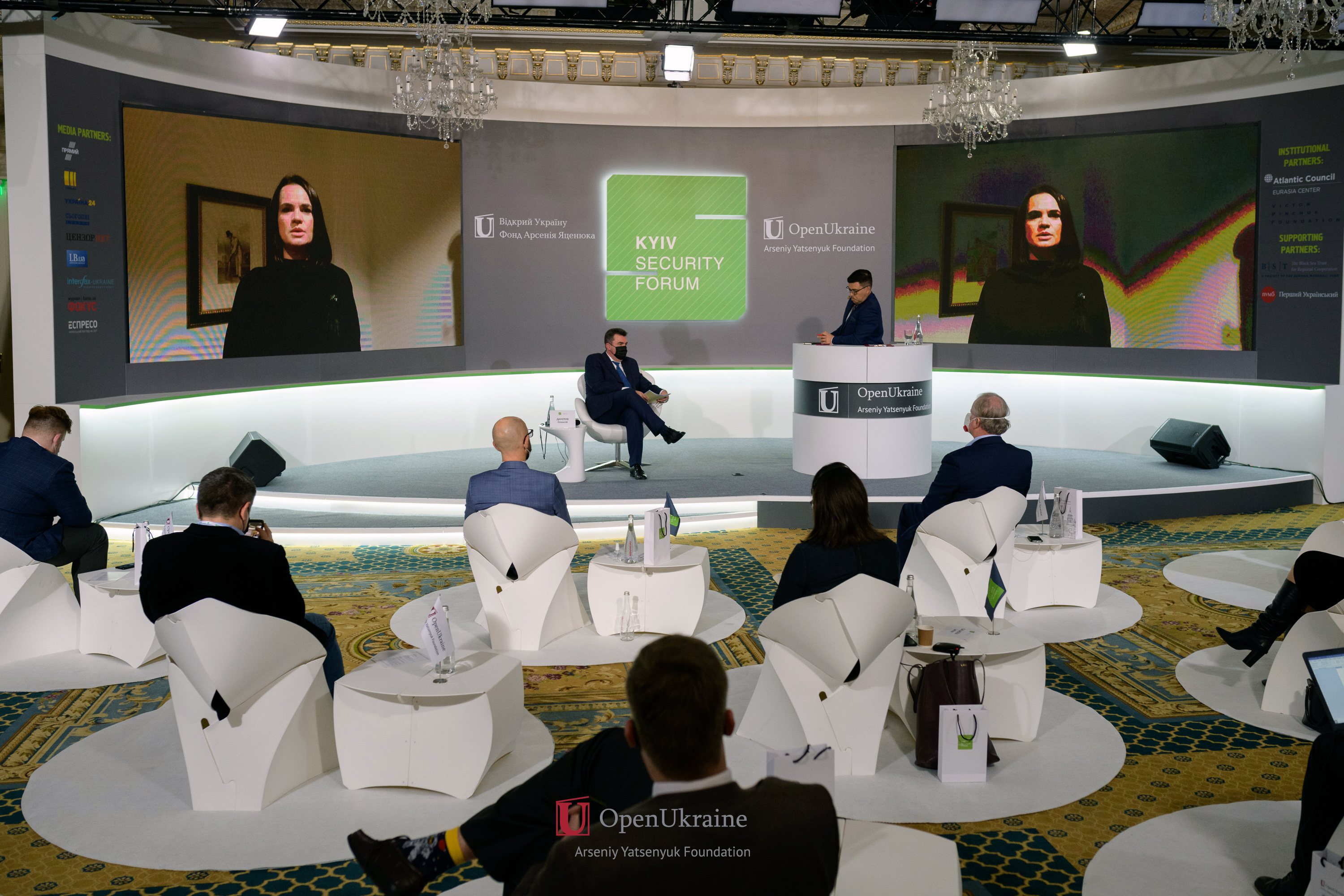 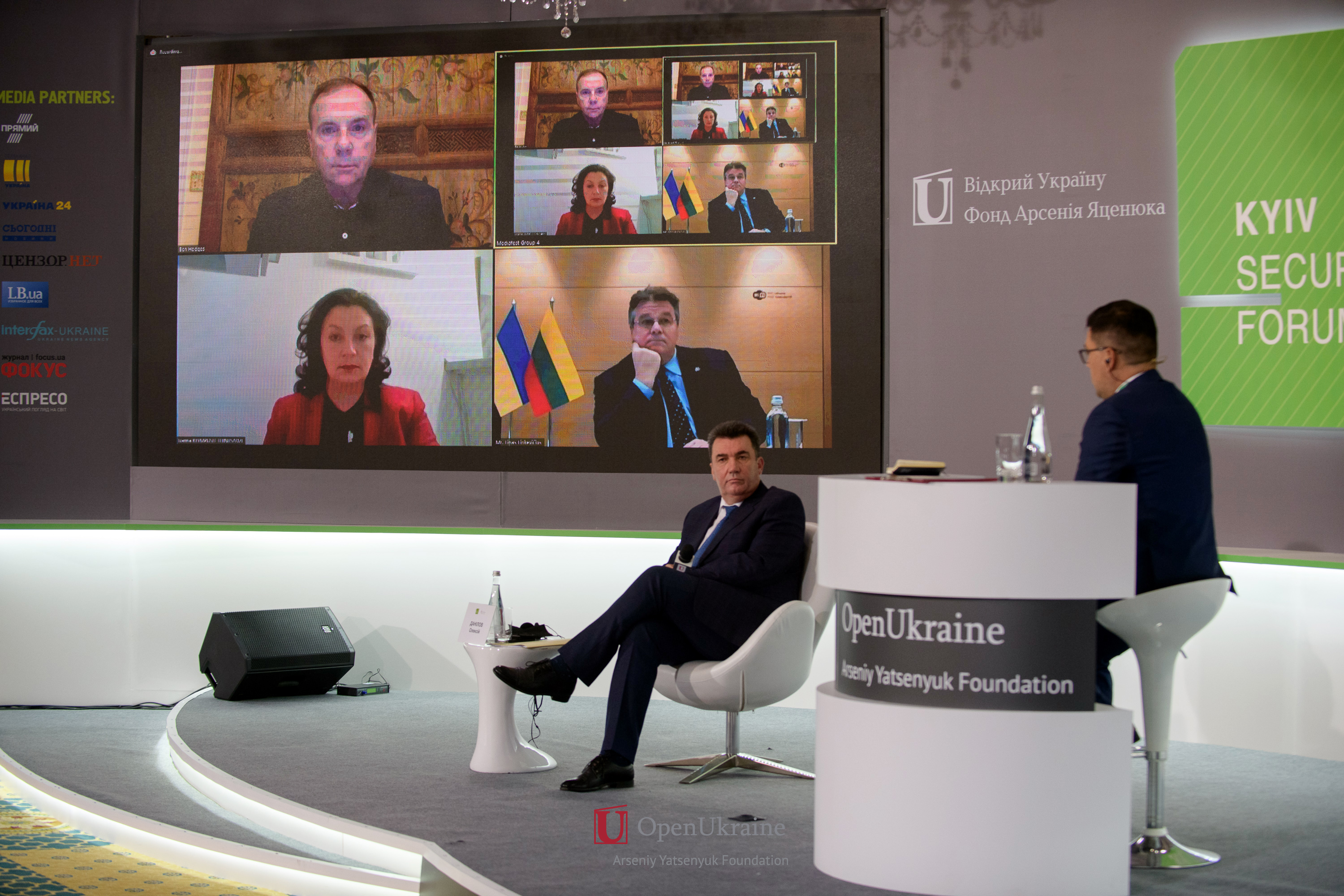 The important part of the discussion was dedicated to the Ukrainian agenda, incl. its foreign policy and security that was widely discussed by The 5th President of Ukraine Mr. Petro Poroshenko, The Minister of Internal Affairs Mr. Arsen Avakov, Deputy Chairman of the Batkivshchyna Party Hryhoriy Nemyria, The Leader of the Voice Political Party Mrs. Kira Rudyk, Mayor of Lviv Mr. Andriy Sadovyi, Ambassador Volodymyr Vasylenko, Member of the Strategic Council of the Movement Against Capitulation and the Judge of the International Criminal Tribunal for former Yugoslavia (2001-2005). Oleksiy Reznikov, Deputy Prime Minister of Ukraine, Minister for Reintegration of the Temporarily Occupied Territories also took part in the Special Edition of the Kyiv Security Forum. 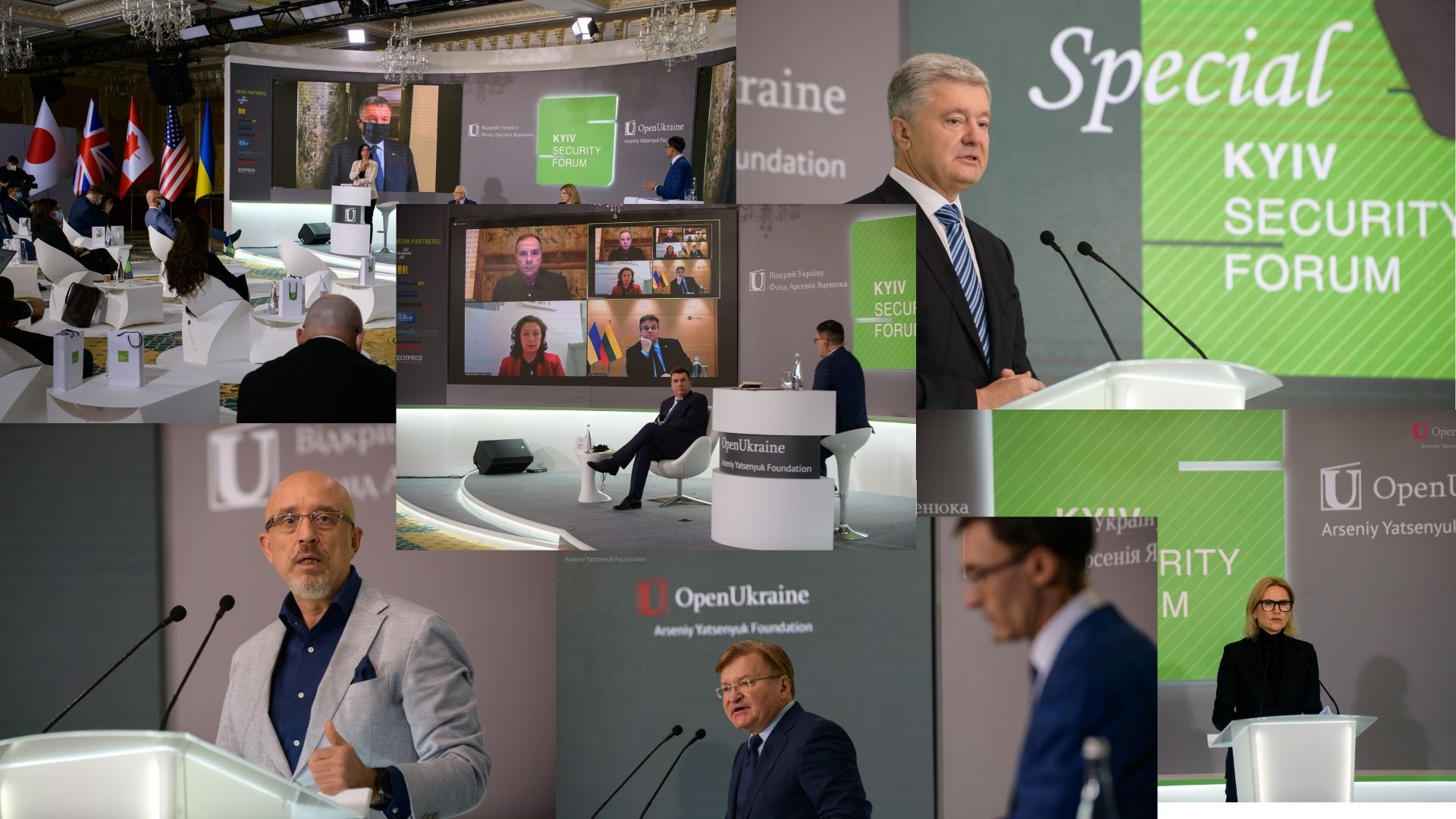 Transatlantic session was organized in partnership with the Atlantic Council and was dedicated to the upcoming 2020 U.S. Presidential elections and what it means for Ukraine. This session has united online the wide range of speakers: Dr. Celeste Wallander, Special Assistant to the U.S. President (2013-2017) and U.S. Deputy Assistant Secretary of Defense (2009-2012), Melinda Haring, Deputy Director of the Atlantic Council’s Eurasia Center, Ambassador John Herbst, Director of the Atlantic Council’s Eurasia Center, Dr. Stephen Sestanovich, Senior Fellow for Russian and Eurasian studies at the Council on Foreign Relations and Special Adviser to the U.S. State Secretary (1997-2001), Dr. Kiron Skinner, Director of Policy Planning at the U.S. State Department and Advisor to the U.S. State Secretary (2018-2019).

Dr. Michael Carpenter, Foreign Policy Advisor to U.S. Vice President Joe Biden, the former U.S. Deputy Assistant Secretary of Defense and the Managing Director of the Penn Biden Center for Diplomacy and Global Engagement has addressed the KSF Special Edition with the concluding remarks, where he has reflected on the clash of the liberal democracies and the authoritarian oligarchies: "This is a clash of two tectonic plates, which occurs in Eastern and Central Europe." According to him, these clashes have already led to wars in Georgia in 2008 and in Ukraine in 2014, when liberal democratic reforms, the prospect of NATO membership for Georgia and the Association Agreement with the EU for Ukraine have become red lines for authoritarian oligarchic regimes and the Kremlin, who wanted to bribe and keep both countries in their oligarchic sphere of interests. 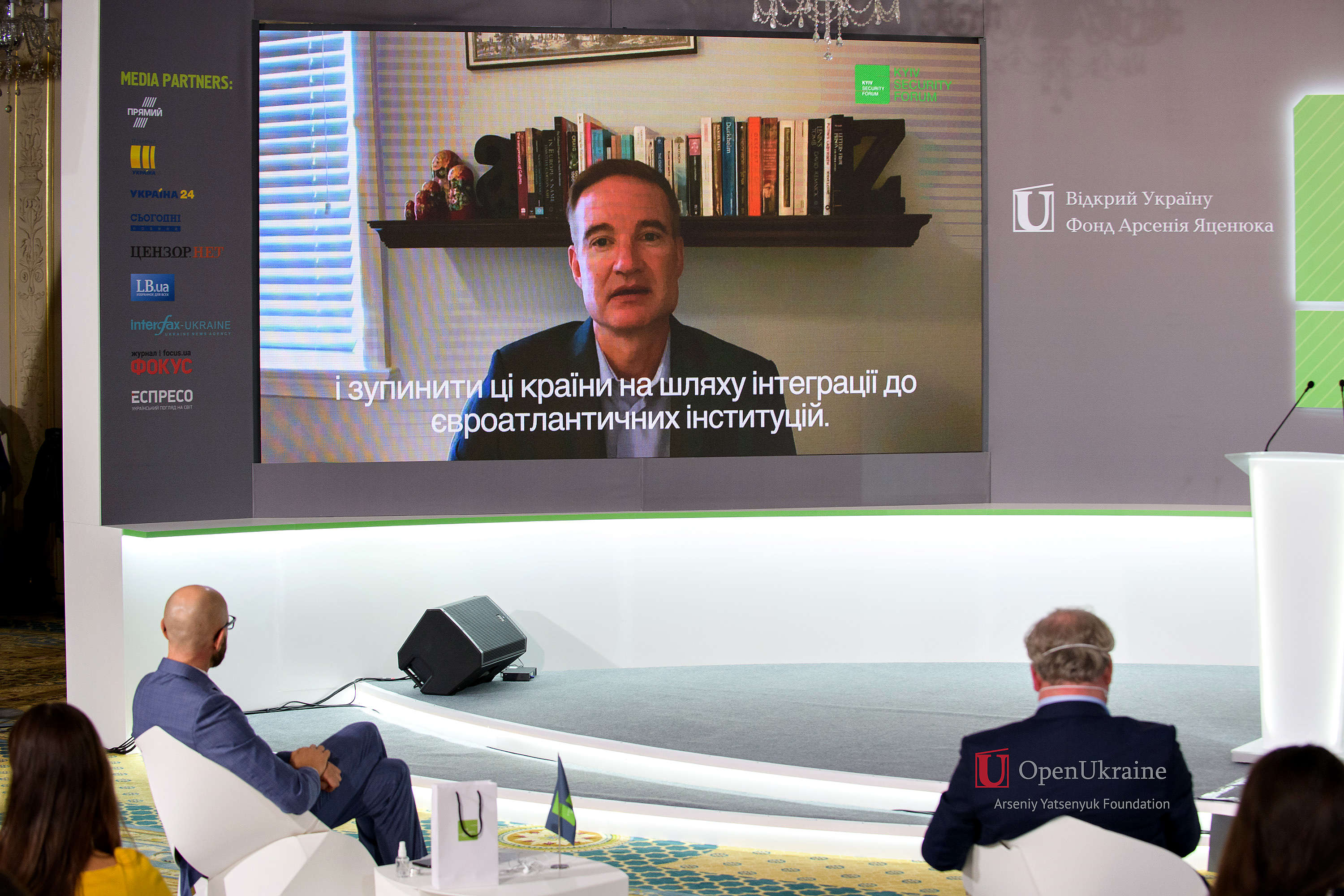 In the concluding remarks Chairman of the Kyiv Security Forum Arseniy Yatsenyuk stressed: "The time will come when the presidents and prime ministers of Ukraine, which will be a member of NATO and the EU, will speak at this Forum. It only takes time and effort. We have time. Efforts must be made. And every Ukrainian has the belief that Ukraine will become a worthy member of the EU and NATO, and that Ukraine will win the fight for its successful European future." 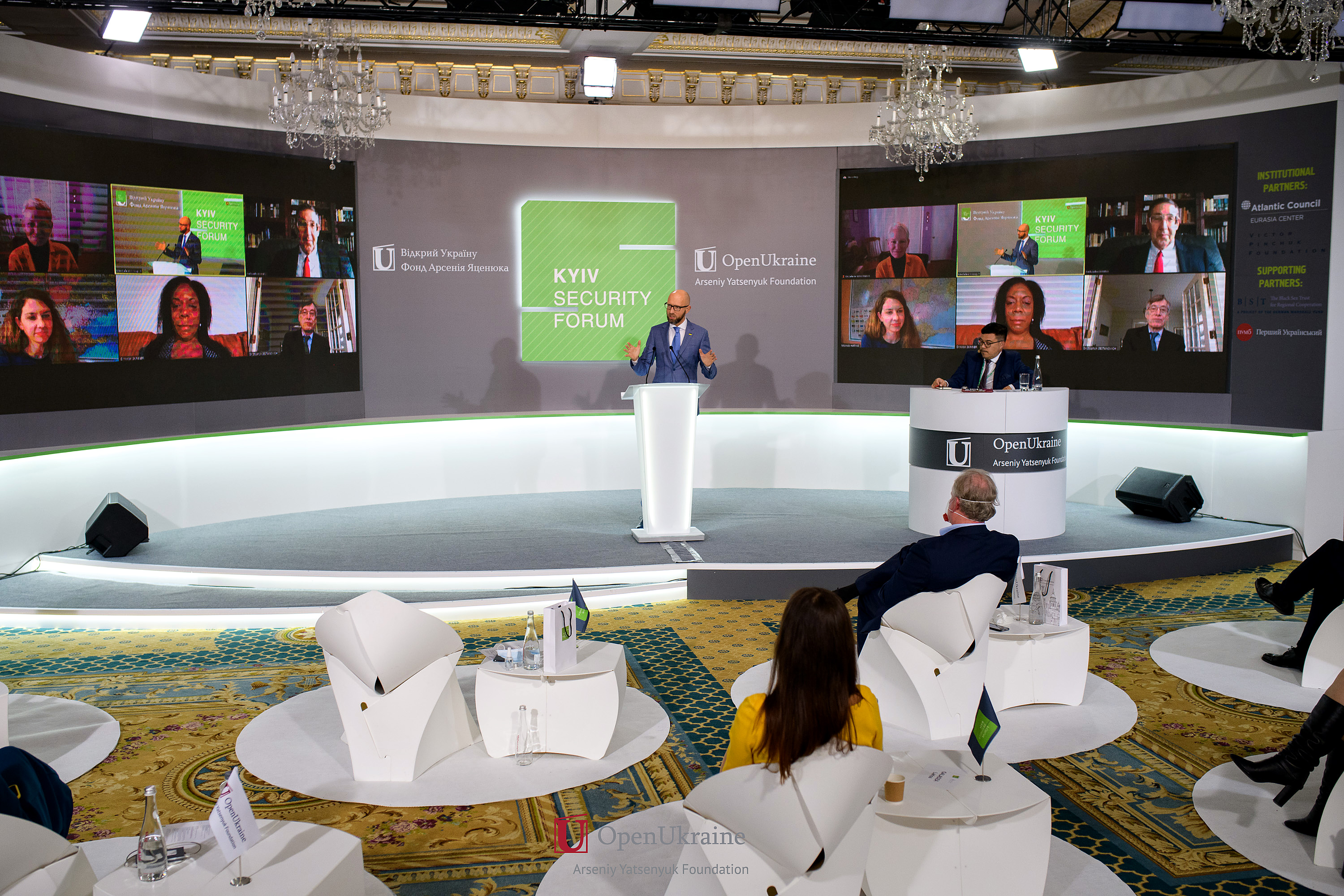 You may also watch the full video of the event at the web-site of the Kyiv Security Forum, YouTube or Facebook.