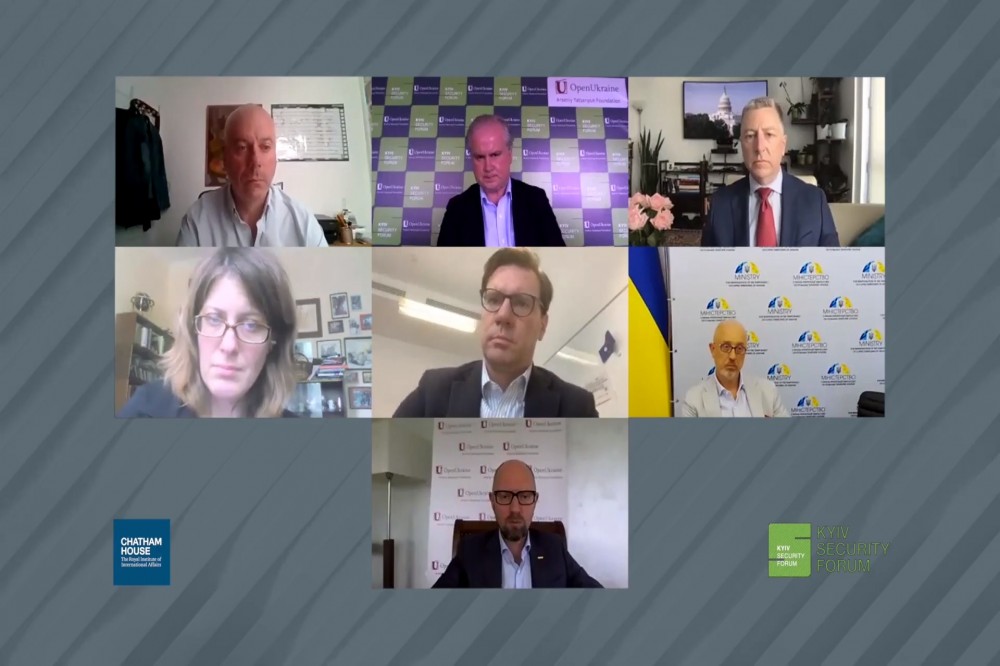 Russia has not implemented and does not demonstrate its intention to implement the Minsk agreements. Instead, Ukraine is doing everything possible to stop Russian aggression and liberate the occupied territories, using Minsk as a platform, emphasized during Kyiv Security Forum online discussion “The Minsk Conundrum: Western Policy and Russia’s War Against Ukraine” organized by Arseniy Yatsenyuk Open Ukraine Foundation in partnership with Chatham House.

Moderator of the discussion Danylo Lubkivsky, former Deputy Foreign Minister of Ukraine and member of the Board of Open Ukraine Foundation underlined that the Minsk agreements are void since they were signed, as they were imposed on Ukraine by force.

Oleksii Reznikov, Vice Prime Minister of Ukraine, Minister for Reintegration of the Temporary Occupied Territories, deputy of the Head of delegation in the Minsk trilateral contact group said that the decision to include representatives of Donbas in the Ukrainian delegation to the trilateral contact group stunned the Russians and about when the elections in the occupied Donbas could take place.

He also described how President of France François Mitterrand warned of fraud when signing the Budapest Memorandum.

The aggression against Ukraine turned out to be Russia's biggest defeat, Duncan Allan, British diplomat and strategist, Associate Fellow at Chatham House said.

According to Duncan Allan, Ukraine should become a "magnet" that will attract the residents of the occupied territories.

The participants of the Normandy format should conduct an international audit of the implementation of Minsk agreements, state that Russia has not complied with a single provision of the Minsk agreements and to put an end to the implementation of Minsk, Arseniy Yatsenyuk, twice Prime Minister of Ukraine, Chairman of Kyiv Security Forum emphasized.

In his opinion, the next step is to offer Russia to expand the format to "Normandy plus Budapest”. the five countries, which were participants in both the Budapest Memorandum and the Normandy format, should offer Russia to sign a multilateral international agreement to restore sovereignty, territorial integrity and ensure security guarantees to Ukraine. Without ambiguous interpretations.

People in the temporarily occupied territories, whom Russia allegedly protects from "oppression" and "lawlessness", are in a terrible socio-economic situation and are forced to risk their lives every day due to the military aggression provoked by Russia, Kurt Volker, US Special Representative for Ukraine Negotiations (2017-2019) and Distinguished Fellow at CEPA stressed.

Nico Lange, Chief of Executive Staff at Federal Ministry of Defense of Germany called a threat that people in five years could get used to occupation of the Ukrainian territories in the Crimea and Donbas.

The belief that this time the aggressor will calm down is naive, Alya Shandra, expert in international relations and Chief Editor at Euromaidan-Press underlined.