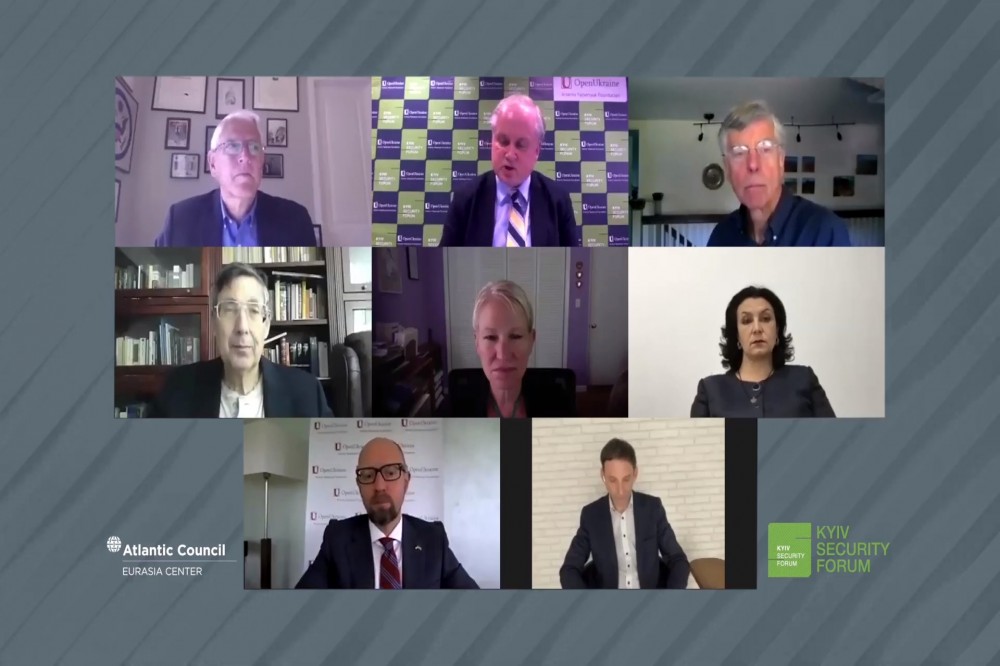 It is a very challenging time for the American-Ukrainian bilateral relations. Russia is using all means to deprive Ukraine of Western support, was emphasized during Kyiv Security Forum online discussion "Ukraine – United States: We Want to Be Heard" organized by Arseniy Yatsenyuk Open Ukraine Foundation in partnership with the Atlantic Council.

Moderator of the discussion Danylo Lubkivsky, former Deputy Foreign Minister of Ukraine and member of the Board of Open Ukraine Foundation underlined that in an attempt to involve Ukraine in the U.S. election campaign, dozens of Ukrainian politicians, diplomats, and experts have signed a statement to American politicians and people calling for the preservation of our strategic partnership. He stressed that Russia would not be able to deprive Ukraine of Western support.

Russia is conducting covert operations in democratic countries to weaken their democratic institutions and increase its own influence, Dr. Celeste Wallander stated. She also emphasized that Russia Was Stealing E-Mails and Releasing Compromising Data.

Russia has to sit in the Hague Court, not at the G-7 meeting, Arseniy Yatsenyuk, Chairman of the Kyiv Security Forum, Prime Minister of Ukraine in 2014-16 emphasized.

It is a very challenging time for the American-Ukrainian bilateral relations : “The stronger we are, the stronger you are. And vice versa. This is the win-win situation for our countries. And Russia wants to have lose-lose situation for Ukraine and for the United States," he said.

At the end of last year, the issue of Ukraine threatened to split American society and was a big problem, however, this did not prevent the increase of military aid to Ukraine and the imposition of sanctions against Nord Stream-2, John Herbst, former Ambassador to Ukraine said.

A graduate of Russia’s FSB Academy Andrii Derkach, who released the alleged conversation between President of Ukraine Petro Poroshenko and Vice-President of the USA Joe Biden, does not hide his intentions to change the direction of his country development, well-known journalist Vitaly Portnikov stated.

Since a lot of representatives of Ukrainian media is under the Russian influence, antimonopoly laws should be used to solve this problem, John Herbst, Ambassador Extraordinary and Plenipotentiary of the United States to Ukraine (2003-2006) suggested.

The parliamentary mono-majority has a "fifth column" that works in the interests that benefit the Kremlin, Ivannna Klympush-Tsintsadze, Chair of the Parliamentary Committee on Integration of Ukraine to the EU said.

Former U.S. Ambassador to Ukraine William Taylor elaborated on how Ukraine is perceived in Washington.

Ukraine should not expect the increase of support from the United States in the next six months, as President Donald Trump is focused on resolving domestic problems and preparing for the upcoming elections, Steven Pifer, former U.S. Ambassador to Ukraine said.