Hugues Mingarelli: "The European Union is building relations with Ukraine based on the principles of freedom, independence and territorial integrity" 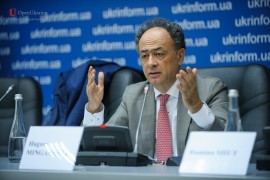 The European Union is ready to provide support for the reconstruction of the Donbas after political settlement. The EU is closely monitoring the efforts of Kurt Walker and the United States on the peacekeeping mission and the dialogue with Surkov. But, apparently, Ukraine and Russia differently approach the ways of applying this mission. Ukraine insists on the deployment of a mission on the entire Donbas territory – to the Ukrainian-Russian border, but Russia denies it. This was stated by the Head of the European Union Delegation to Ukraine Hugues Mingarelli during the meeting within the framework of the "Open World" discussion club organized by Arseniy Yatseniuk Open Ukraine Foundation.

The European diplomat reminded that four years ago, the EU imposed sanctions on Russia for the occupation of the Crimea, which is an obvious violation of International Law, and for all the terrible things that arose from aggression in the Donbas. "We are currently supporting efforts to resolve the conflict on the platform of the Minsk Agreements, as well as in the "Normandy format". To be honest, it has not yet succeeded in achieving significant progress. But we are considering the Minsk platform as the only way to have dialogue this time, and it will be only worse if we can not support such a dialogue for one reason or another".

Despite these problematic aspects, Hugues Mingarelli expressed satisfaction with the ongoing processes in Ukraine – civil society participation is intensifying, decentralization reform is actively being implemented, anti-corruption bodies have been set up.