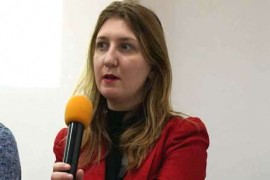 Five paintings by Ukrainian artist Darya Tsymbalyuk were selected to take part in the exhibition "Woman Shall Inherit the Earth". She presented her creations at the Panacea Museum in Bedford (UK). Arseniy Yatsenyuk "Open Ukraine" Foundation supported the artist by providing a travel grant for a trip to the UK.

Together with the Syrian artist, Daria became the only one among 35 artists not British whose works were presented at the exhibition.

"It was a great joy for me to get my works at the exhibition "The Woman Should Take The Earth", because I believe that the language of art can often better than news tell about events in Ukraine. Thanks to the grant from "Open Ukraine", I was able to tell about the war in Ukraine, not only through the paintings, but also personally during the artist talk that I gave on the penultimate day of the exhibition. The discussion seemed very intense and deep, some visitors cried, listening to my stories about the context in which the paintings were written, – said Darya Tsymbalyuk.

Possibility to go to Bedford, personally meet curators, other artists and tell about her paintings have become an important impetus for self-improvement for Darya Tsymbalyuk. The artist is convinced that, thanks to new connections, cooperation between Ukrainian artists and the NOHAT group is just starting.

Darya Tsymbalyuk is a co-author of the "Odyssey Donbass" project, which was launched in 2015 in Kyiv. "Odyssey Donbass" – conducts in-depth interviews with forced in-migrants. During an interview in-migrants personally create mental maps of the places they had  to leave. These maps capture cities as they were before the combat actions began and remained in the memory of people, that is, they describe a certain cultural space that no longer exists. The "Odyssey Donbass" was presented as part of the exhibition project "What's Your Name?" at the Art Arsenal, collaborated with the Odessa Biennale of Contemporary Art and other institutions.