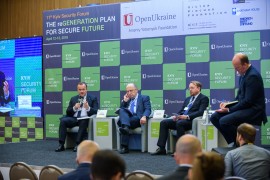 On April 12-13 Kyiv hosted the 11th Kyiv Security Forum. This year's participants of the Forum were the Prime Ministers of Ukraine, Lithuania, Moldova, current and former heads of the Ministries of Defense of the EU, the USA, Georgia, high representatives of the European Parliament, senior diplomats from the United States, Great Britain, Germany, leading security experts from Washington, Brussels, Paris.

According to Arseniy Yatsenyuk welcoming words, the European Union shares Ukraine's aspirations for membership in the EU: "NATO says that the door for Ukraine is open. I want to understand: this is the case or not. I think that there should be only one answer for our European partners: "Yes, we want a strong united Europe, where Ukraine is a member." The answer to our NATO allies should be: "Yes, Ukraine will be a member of NATO because we as NATO want to be stronger and Ukraine is strong".
During the Forum, Prime Minister of the Republic of Moldova P. Filip stressed that today the traditional threats have not diminished, but also new hybrid threats, cyber threats have arisen. "Traditional threats, such as military ones, still exist. We see them also in the Republic of Moldova, because there are Russian troops on our territory. Such threats are relevant for the whole Eastern Europe. Such "hot spots", conflicts, presence of foreign troops, who are in a foreign territory illegally, carry such a threat that confrontation policy will only increase", he said.
Deputy Secretary General of NATO, Rose Gottemoeller, believes that joining NATO and the EU is a realistic goal for Ukraine. "It is not so idealistic for Ukraine to have Euro-Atlantic aspirations, to be willing to join the European Union and NATO. I believe that these are very important and realistic goals. But I will not hide from you that before you are ready to join NATO, you would have to conduct rather difficult job," she emphasized.
In total, more than 600 experts, politicians, diplomats, and government officials took part in the Forum, among them more than 100 foreign visitors from more than 20 countries of the world.
For reference:

The annual international event Kyiv Security Forum was launched by the Arseniy Yatsenyuk Foundation Open Ukraine in 2007 as a platform for high-level discussions on the current issues in Europe and the Black Sea region. The Forum aims at increasing security cooperation between the EU and the Black Sea region, raising awareness about regional developments among key regional players, promoting the role of independent and non-governmental actors in setting the security agenda in Europe.

The event is being held with the support of NATO Information and Documentation Center in Ukraine, the German Marshall Fund, The Victor Pinchuk Foundation, The Royal Institute of International Relations, Chatham House (UK), and The Regional Representative Office of the Friedrich Ebert Foundation in Ukraine.

Arseniy Yatsenyuk: We would never leave our path. Our way is democratic, professional and pro-Western