Creative masterpiece of Ukrainian artists was presented at the Berlin festival 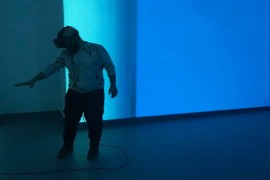 The great masterpiece of Ivan Svitlichny and SVITER art group – the algorithmic installation of Verbatix was presented at the Pushkin & Gogol gallery, within the framework of the Transmediale Vorspiel Festival of Digital Arts and Culture, held in Berlin from January 26 to February 5, 2018.

The Arseniy Yatsenyuk Open Ukraine Foundation supported participation of artist at this event.

The opening was attended by fifty spectators, including representatives of the Transmediale festival, the Ukrainian Embassy in Berlin, international artists.

During its period of work, the exhibition attracted a considerable interest from the visitors. It should be noted that, unfortunately, Ukrainian artists are not frequent residents of artistic events of such an importance, – admits Ivan Svitlychny. "But this time due to the support of Open Ukraine Foundation and because of our excellent project presentation among the Berlin cultural representatives, the issue of constant participation of Ukrainian artists in the festival Transmediale was initiated", – Ivan Svitlichny.

The Transmediale Festival is a world-famous cultural and digital art event that has been held in Berlin for over three decades, every year. The basis of the program this time were conferences, exhibitions, performances, film shows and master classes, with the participation of nearly 200 artists from around the world, for more than twenty five thousand spectators.

Ivan Svitlychny is a Ukrainian artist, author of objects and installations. Born in 1988 in Kharkiv. Graduated from Kharkiv State Academy of Design and Arts (KDADM), specializing in "Stanko and monumental sculpture". He studied in workshops by V. Kulikov, V. Kochmar, V. Shaposhnikov.

In 2009, for the work "Factory premises" he received a prize for innovation in sculpture. In 2010, he became the founder and curator of the artistic self-organization "01011101", the curator of the creative exhibition center "CHP" (Kharkiv), which was launched for the development of a local cultural environment.