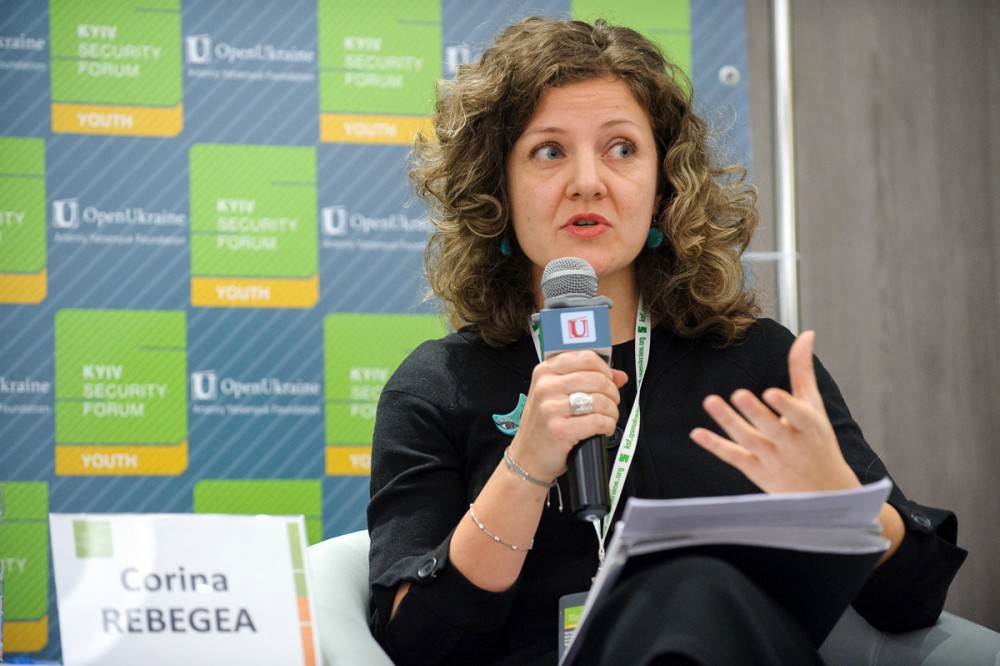 Ukraine has gained a unique experience of effective counteraction to the Kremlin's disinformation and propaganda campaigns, which are also actively used in the EU, an international expert on information security, Fellow in Residence at the Center for European Policy Analysis (USA) Corina Rebegea said during the VI Kyiv Security Forum for Youth.

"Over the past three years, we have been evaluating the dynamics of Kremlin-sponsored disinformation campaigns and operations, as they influenced the Central and Eastern Europe. And Ukraine is here in the forefront, on the front line. We believe that Ukraine is, in fact, an interesting and unique example of how this information war, this influence can be fought" she stated.

Corina Rebegea underlined that the Russian manipulations adapt very quickly to a change in the situation, as well as disinformation mechanisms have a high rate of adaptation. According to her, a significant problem is that a piece of truth is used during the Russian disinformation campaigns, which in combination with the lie makes it difficult to identify manipulations.

The expert pointed out that there is a large number of Kremlin-supported channels dealing with information manipulation. "We should clearly look at this whether there is a certain dependence of media content, a certain "party’s policy" is clearly followed, then these channels should not be considered as a means of mass media" she explained how propaganda channels could be identified. Based on this, the expert reminded that during the French election campaign, the presidential candidate Emmanuel Macron had banned some Russian media from participating in a press conference because they were dealing with disinformation and propaganda.

Along with this, there are a lot of websites, blogs that spread various conspiracy ideas, conspiracy theories, alternative news. "They breed, clone each other, disappear and appear, there is no connection between them, it is impossible to follow who sponsors them, but they clone like mushrooms. And fill the media space. And what's really important is that they are very well coordinating what they are promoting with the official Kremlin policy. There are no matches. It's just amazing, it's fascinating", C. Rebegea said.

The impact of any Russian disinformation campaign is also increasing with the use of social media: "Social media is the platform where all these conspiracy theories can blossom and blossom, because there are people who could be recruited, there are always eyes that they are ready to read and ears that are ready to hear".

Also, the Russians use different individuals as speakers on certain media platforms in order to influence on opinions of certain categories of people.

According to the expert, ensuring the transparency of property rights and financing is important to combat the hidden channels of disinformation. "After all, we can track only if we know whom we should follow", she said.

In Central and Eastern Europe, the Kremlin's manipulation strategy varies according to the country. Narratives and messages adapt to each country individually, and in some countries, the Kremlin does not want to exaggerate and sharply increase its attempts to influence people. "But overall, the goal is to undermine the solidarity of the members of the NATO, to shake the situation and stability in the candidate countries for membership in the Alliance, to cause distrust of the population to democratic governments", the Fellow in Residence of the Center for European Policy Analysis stressed.

According to her, all Russian disinformation and propaganda campaigns combine a common narrative, such a kind of cluster concept. "How can we track this cluster narrative - if there is some kind of anti-Western propaganda. What else an aggressor can do, whether not to tell that the West wants to suppress Russia, put it on its knees. And if we are talking about discrediting the West, there will be some attacks on the LGBT community, there will be attempts to justify Russian aggression as a "mechanism of self-defense", a migration crisis in order to weaken national solidarity. Very often they are played by the fact that they point the countries of Eastern Europe that they are colonies and resource bases of the West. It constantly points out that within a democratic regime the same drawbacks exist. These are all the key elements by which you can track this cluster narrative", the expert said.

At the same time, while showing the Western world in a negative light, Russia is being demonstrated as a kind of "stronghold isolated island from evil people, where true Christians can find refuge, people who adhere to traditional views of life", C. Rebegea added.

Alongside with this, Russian propaganda is actively working in the socio-economic sphere. "It's consistently said that no strategy for economic development does not work, providing some "counterarguments", talking about the European integration which also does not work, and on the contrary - it brings us back. Even if there are any positive changes, they are given with a negative connotation," the expert of the American think tank pointed out.

The Russians are constantly trying to speculate on historical issues that are painful in one country or another. There are attempts to stimulate interethnic conflicts in different states.

Also, in Ukraine the Kremlin is taking steps to enhance nationalist sentiments in order to use them to combat "harmful" influence of the West.

"We can observe when such a message is launched that Ukraine should not trust its Western partners and its neighbors, constantly presses on that Ukraine and Russia are fraternal countries, one and the same civilization, who fought against the fascists once together, etc.", Corina Rebegea noted.

According to the expert, the Russians use disinformation, combining channels of its distribution and exit points with different frequencies of repetition of these outfits. To counter this disinformation campaigns, first of all, personal awareness should be increased and all the dubious information should be filtered, especially with emotional context.