The lecture on «Ukrainian cinema in names: poetics, realism and underground» 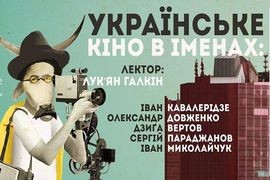 The Arseniy Yatsenyuk Open Ukraine Foundation in a partnership with a free lecture-hall Wise Cow invites to the lecture on «The Ukrainian cinema in names: poetics, realism and underground».

Organizers of the lecture offer to back to the history of the national cinema and make an acquaintance with the figures that can hardly be called otherwise than hieratic.

For example, who knows that  famous sculptor Ivan Kavaleridze was a brave screen avant-gardist and became one of the precursors of poetic cinema? Or do you remember that «Shchors» by Olexander Dovzhenko was shot on the personal request of Stalin? Scenario of «Man with a Cinema camera» by Dziga Vertov was rejected in Russia, but was gladly accepted in Ukraine, Sergii Paradjanov worked on the film «Taras Shevchenko» and was a student of the same Dovzhenko, Ivan Mykolaychuk is often called Ukrainian Orson Welles - and this is only a small proportion of those treasures that hides the history of our cinematography.

The lecture will cover the following topics:

The artist and the governance. Ivan Kavaleridze and long decades of his wanderings;

Between poetry cinema and government order. As Olexander Dovzhenko was creating a national on-screen world in the years of repression;

Man with a cinema camera and his brothers. Dziga Vertov invents a brilliant film, Mykhailo Kaufman shot it, and Borys Kaufman  with Marlon Brando received «Oscar»;

Armenian in search of Ukrainian identity. Why did Sergii Paradjanov chose the work by Kotsiubynskyi;

The actor, composer, writer, director. Ivan Mykolaychuk was  the artist who could do everything, but had not enough time to do everything.

The lecture will be conducted by Lukyan Galkin.

Registration for the event is required at following link: http://goo.gl/forms/G5XkunS9dPbZUJa62