Strength is in unity. This should become the main motto for the EU, Ukraine and the whole free world 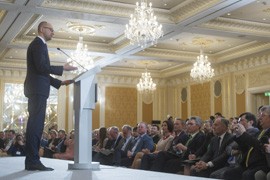 “Ukraine must become a member of the European Union and NATO. This prospect has no alternatives and it is a part of my political program,” – said the leader of the “Narodny Front” (People’s Front) political party Arseniy Yatsenyuk, on Thursday, 14 April, during the 9th Kyiv Security Forum organized by the Open Ukraine Foundation.

The EU, according to Arseniy Yatsenyuk, is facing challenges as well, in particular those of the Dutch referendum, BREXIT, migration crisis. He said that the institutional capacity of the EU to overcome all these obstacles is extremely important at the moment.

As Mr. Yatsenyuk mentioned, that during all previous crises the EU has demonstrated that the countries of the European Union “were always wise and strong enough to find a common language, a common consent and to put an end to a crisis becoming even stronger than before” as “the challenges occur only to be coped with”.

“Strength is in unity. This should become the main motto for the EU, Ukraine and the whole free world,” – stressed the leader of the People’s Front.

Arseniy Yatsenyuk also noted that in today’s world the global security issues “are to be directly linked to the strength and unity within NATO: “There was, is and will be no another alliance that would ensure security in the world. That is why the challenges faced by the world and the countries of the free world, make the Allies to reconsider their policy.”

The politician admitted that Ukraine is seeking to become both a member of the European Union and a member of the Alliance. “I clearly see that this is not going to happen right now or the day after. But I also understand well that there is no alternative for this aspiration. And this is a part of my political program. The country should join the European Union and become a NATO member”.

“There are many difficulties, but difficulties fall on the shoulders of only those who are strong. The free world’s strength is in its’ values and beliefs. We are the part of that free world. I do appeal to our Western partners: we are all united; we are all united not only in words, but in our common actions. Support the Ukrainian people – they deserve it. They proved that they are struggling for freedom and independent country, meaning energetic, political, economic and financial independence. We have broken free from the area of Russia’s influence. Finally after two years I can declare: Ukraine has become independent. Support our people and our independence,” – underscored Arseniy Yatsenyuk.