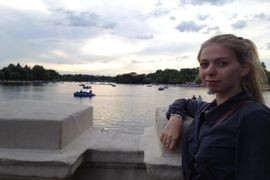 Olesia was born in Odessa. From 2009 to 2014's she was studying at the Odessa I. I. Mechnikov National University, Department of International Relations (she has a diploma of international affairs expert, political scientist with honors). In August 2012 she passed the language practice in the UK - University College London. In 2014 Olesia entered the Diplomatic Academy of Ukraine of MFA of Ukraine. She engaged in active social activity. She participated in the EU program Study days, in the conference «Security Challenges. Ukraine. Europe. World», training «Scripting of security reforms in Ukraine. Experience of Slovakia». Olesia also held training practice at the Embassy of Ukraine in the Hellenic Republic. She is fluent in English and Greek languages, and studying French and Spanish.