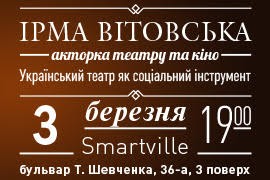 The «Open Ukraine» Foundation invites to the Art Club «Faces» meeting with theatre and film actress, TV presenter, volunteer Irma Vitovska that will be held on Thursday, 03 March at 19:00.

The theme of the meeting is «Ukrainian theatre as a social instrument».

During the meeting Irma Vitovska will tell about charitable art project «Oscar and the Lady in Pink», that is a unique theater project dedicated to seriously ill children. The actress wants to help seriously ill Ukrainian children and stimulate the society to solve important problem of the palliative care, that is not enough practiced in Ukraine. «I think it is necessary to work with such a theater, where people would came to cry and laugh» - Irma Vitovska says.

Participation is free. Registration for the event is required at following link: http://goo.gl/forms/ZxVv5Dei9c

The event will be held in the Free Space «Smartville», Taras Shevchenko Boulevard, 36a, 3rd floor.

Irma Vitovska is a modern Ukrainian theatre and film actress; she works in the Youth Theatre (since 1998), she is best known by the role of Lesia from TV serial «Lesia + Roma» (2005-2007). Irma is also a TV presenter of entertainment shows on Ukrainian television. She repeatedly participated in many international theatre festivals and was granted personal rewards. The actress was a coach in the show «Small Giants» on the TV channel «1 + 1».

Irma Vitovska was awarded the Order for defense of the country for her patriotism, active civil position, selfless help to people who need it.