Meeting with the author of «The New Machiavelli», Chief of Staff to Prime Minister of Great Britain Tony Blair (1995-2007) Jonathan POWELL 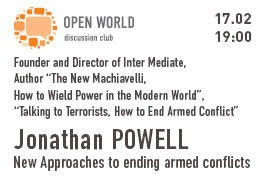 The «Open Ukraine» Foundation within the Discussion Club «Open World» invites to the meeting with the well-known diplomat, Chief of Staff to Prime Minister of Great Britain Tony Blair (1995-2007), author of «The New Machiavelli», «Talking to Terrorists, how to End Armed Conflict» Jonathan Powell, that will be held on Wednesday 17th February, at 19:00.

Theme of the meeting – «New approaches in solving armed conflicts».

Registration for the event is required at following link: http://goo.gl/forms/R3HLrkqxjz

Jonathan Powell is a founder and director of Inter Mediate, an NGO dedicated to conflict resolution around the world, former Chief of Staff to Tony Blair from 1995 to 2007. Jonathan was also appointed as the British Prime Minister’s Special Envoy to the Libyan transition in April 2014. Jonathan was also the British Government’s chief negotiator on Northern Ireland from 1997 to 2007 and played a key part in leading the peace negotiations to a successful conclusion over that decade. Before working for Blair, Jonathan was a British diplomat from 1979 to 1994, specializing in negotiations. At the end of 2010 Jonathan published «The New Machiavelli, How to Wield Power in the Modern World». His new book «Talking to Terrorists, How to End Armed Conflict» was published in October 2014.

Discussion Club «Open World» is an educational project of the «Open Ukraine» Foundation for socially active young people. Its goal is to raise a new generation of responsible leaders. Every month the Foundation holds lectures with renowned experts, politicians and public figures, during which they discuss ways of effective solutions to social problems in Ukraine and in the world. The Head of Supervisory Council  the «Open Ukraine» Foundation is Tereziya Yatseniuk.