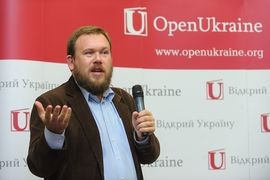 During the meeting within the program «Open Yourself» organized by the «Open Ukraine» Foundation Candidate of Psychological Sciences, lecturer of Taras Shevchenko National University Oleksandr Bilous told about the facts that can be interesting for the psychologist and the average person in terms of genetics, what can be inherited and how it can be changed.

During his speech the expert told the audience what genetics is and why psychogenetic is so important for sorting out your feelings and for child-rearing practices.

«There are a lot of significant psychological, behavioral, cultural differences between people and nations. Many people are interested in the question: to what extent they are explained by genetics? To understand this things, it is necessary first of all to understand what does it mean «the influence of the genes on behavioral or psychological characteristic», - said O. Bilous.

By providing concrete examples about genes that affect on certain psychological characteristics and personality traits, and also giving examples of complex influence of genetic and environmental factors, Candidate of Psychological Sciences noticed that we must remember that it is not always about the «general features» but about the differences by these features on the studied sample.

«The «influence of genes» (heredity) is thought of as the part of variability of characteristics which is explained by genetic differences between individuals in the sample. Secondly, almost all psychological and behavioral characteristics are determined not by one or few genes, but a large and difficult complex of factors of different nature: as genetic so environmental. Moreover, the combined effect of this complex of factors doesn’t come down to a simple sum of their effects: for example, the effect of one or another gene on the signs can occur or not occur depending on the environment,» - the expert said.

He also drew attention to the methodology of child-rearing and also advised the audience to communicate with their children as much as possible, to promote their interests in every way, to grow psychologically healthy and intelligent children as a result.

As an example, he mentioned an interesting case from the life of the famous mathematician Sofiya Kovalevska.

«According to her memories, when it was a repair in her parents` house, there was a lack of wallpaper in Sophia`s room, and one wall was left with a black coating, so it was decided to use copies of the lectures of Professor Ostrogradskiy that concerned differential and integral calculation. Little Sofiya from childhood tried to understand the cryptic formulas and marks, as a result they stuck in her mind so deeply, math teachers were surprised at the fact how quickly the girl assimilated complex formulas» - shared the teacher of KNU.

Thus, he is convinced, that parents could interest their child correctly and develop in the girl inclination to science, which was pursued by Sofia all her lifetime.

Summarizing his speech, Oleksandr Bilous stressed that the question of psychology, genetics, psychogenetics must be resolved comprehensively, because not only genes affect the formation of a person. It is very important to remember about the environment, emotions, first impressions that form the big picture and, as a result, the nature and future activity of the person.

The Head of Supervisory Council of Foundation Tereziya Yatseniuk noted that such meetings are very useful for many of us as they help to sort out our feelings, change approaches to child-rearing, teach properly and with understanding react to the behavior of other people, which may be contingent on genetic aspects.

Oleksandr Bilous is a Candidate of Psychological Sciences, Vice Dean of Faculty of Philosophy of Institute of Continuing Education of Taras Shevchenko National University. His academic interests include ecological psychology of individual and psychology of art. Oleksandr is the author of numerous publications on actual issues of psychology.

«Open Yourself» program aimed at personal development and strengthening of individual education. The objective of the program is an extension of new knowledge and ideas for self-development promotion and promotion of civil society development in Ukraine.

Within the framework of the program there are held public lectures, meetings, trainings by specialists in various spheres in order to help public learn, understand and discover themselves.

«Open Yourself» program is one of the directions of the «Open Ukraine» Foundation work. Head of Supervisory Council of Foundation is Tereziya Yatseniuk.

The lecture of Valerii Dorozhkin on "Who am I, in fact, or my faces in identity clothes?"

"Mask, I know you!" - the lecture about women from psychoanalyst Olena Medvedieva

How not to get old before time: the psychological secrets of old age

"Cosmetology and psychology: what motivates a woman to beauty?"

Online streaming of the lecture of Marja Nesterova on «Psychosomatics: how to understand disease?»