Fairytale and its role by storyteller Sashko Lirnyk 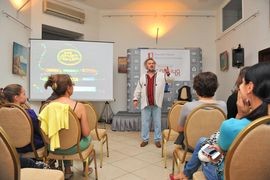 Storyteller, actor and scenarist Sashko Lirnyk gladdened participants of Art Club “Face” organized by the Arseniy Yatsenyuk “Open Ukraine” Foundation with real Ukrainian fairytales and explained what input they have on education of nation.

“For some reason, everybody think that the future of the nation depends on politicians. But in reality it depends upon culture. And it has not the abstract reason, as “more jokes you create, the bigger input on culture you made”. The secret of Universe lies in Creation. Everyone heard about it, but didn’t think about the value. Anyway, it is very simple and plain as for little children. It is as a tale, for better understanding. On the stone tablets engraved actually not the strict commandments, but “Lullaby-Lullaby” and “Speckled Hen” To create eternal things can only Culture. All starts with culture”, said the artist.

During the meeting the storyteller improvised a lot, read stories, jokes and discovered new actors among the audience. The grateful audience – from the smallest to older people – laughed, played, immersed to the atmosphere of fairytale along with the artist. And the most important that everybody learned about our, Ukrainian, roots and its culture. The artist is convinced that Ukrainians have what to show to the world – and it goes not about material wealth. First of all, it goes about Ukrainian talent and Ukrainian soul.

Sashko Lirnyk noted that he tries to unite storytellers and to discover new talented people. The first acquaintance with the representatives of genre “tale” is planned during the Country of Dreams, which will be held on 10-11 of October, 2015. There he is going to present the “Tales’ platform”.

“This will be the first attempt to launch Ukrainian Storyteller Festival that I wanted to do for many years”, shared artist.

Sashko convinced that it will help to popularize Ukrainian fairytale and educate a new generation of real Ukrainian patriots.

Lirnyk Sashko (Oleksandr Vasyuk) – is a unique man. He managed to make incredible – to revive the genre of spoken narrative that has disappeared in Ukraine. Perhaps, there is no child or adult in Ukraine who wouldn’t have heard tales of Sashko Lirnyk.