Ambassador Marius YANUKONIS spoke about cooperation between Ukraine and Lithuania 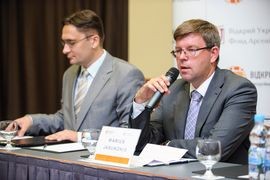 During the meeting of the ‘Open World’ Discussion Club organized by the Arseniy Yatsenyuk Open Ukraine Foundation the Ambassador of Lithuania to Ukraine Marius YANUKONIS spoke on Lithuanian support of Ukraine, business circles interested in Ukraine and how young people and experts would help Ukraine overcome difficulties.

“The Lithuanian business sees great potential in cooperation with Ukraine... It should be mentioned that a great number of Lithuanian experts works in the Ukrainian government institutions as consultants and thus has the possibility to impart reformation experience, because at this period it is Ukraine that defends European values and European civilization. However, we must remember that European values are universal. Shall Ukraine fail, it will be followed with significant negative consequences for Europe – more damaging than the effects of the Greek crisis”, the Ambassador said.

He stressed that the financial support of Ukraine from Lithuania constituted more than two million euro and Lithuania is determined to assist Ukraine in the future.

“We observe growth of Russian military activity in the Baltic region. Today, NATO has established a new division team in Lithuania. This is our response, as we have to defend ourselves. Lithuanian defense budget was doubled during the last year”  – said the Lithuanian diplomat.

Marius YANUKONIS mentioned that in 1991 his country faced the consequences of the Russian aggression as well.

“And we know that independence is not a value given for no particular reason. We must protect it, not only by military and diplomatic means, but also by implementing reforms. Lithuania's greatest achievement was a consensus of political elites on foreign policy and introduction of market economy. This is the experience that we can share with Ukraine”, – the Ambassador said.

He also expressed hope that in the nearest future Ukraine will have a non-visa regime and more opportunities for cooperation with the EU.

Mr. YANUKONIS concluded his speech with his well-wishes for Ukrainian young people: to believe in what they are doing, to see thei objectives clearly and to remain optimistic, as the Ambassador is convinced that the civil society and the youth are the strong points of Ukraine.

Marius Yanukonis - Ambassador Extraordinary and Plenipotentiary of Lithuania to Ukraine.

From 1995 to 1998 served as the third and then second secretary of the Central Europe Department, Ministry for Foreign Affairs. Later he got the position of Foreign Policy Assistant under the President of the Republic of Lithuania.