Dato Turashvili spoke about art with the Georgian accent 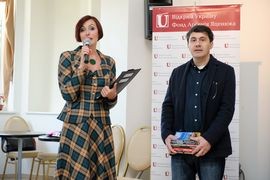 Georgian writer, author of the bestseller "Jeans Generation. Escape from the USSR" told about his literature career and how he had managed to attract young people to the mass reading.

He shared the secret of his success during the Art club "Faces", organized by the Arseniy Yatseniuk Open Ukraine Foundation with the assistance of the Embassy of Georgia in Ukraine.

"It is very interesting thing that there was much more cultural freedom in all the USSR republics except Russia itself. It is inherent to all empires. The performance of Oscar Wald could be set in Dublin but not in London. The same in Tbilisi where plays that could not be set in Moscow, were performed. The band "Time Machine" recorded their first album in Tbilisi. The city held such a great rock festival while anything similar taking place in Moscow was hard to imagine. This was done on purpose, so that people did not think about the main thing. Like in the circus: for the beast not to go wild he is treated with delicious lure", - said Dato Turashvili.

During the meeting he also told about his current work and said that nevertheless young people today, despite the criticism, love to read and are interested in modern literature.

Herewith the writer is convinced that modern authors should be interested in new technologies and be accessible and understandable to the young generation. "They enjoy reading e-books, many of them draw information from the Internet. This means that young people are interested in the things they like. And they are looking for the information in such a format that is understandable and accessible to them ", - stressed the Georgian writer.

David (Dato) Turashvili is a writer, playwright, screenwriter. Born in Tbilisi. The first collection of prose Turashvili published in 1991. Since then 17 more author`s books has come out. Nowadays Turashvili works are published in 7 languages in different countries. In particular, the novel "Escape from the USSR" ("Jeans Generation ") became a bestseller in Georgia. This book was republisheded in the Netherlands, Turkey, Croatia, Italy, Germany and Ukraine.